The Masonry Dam present day. The Waihi Dredging Plant site is behind the trees top left. 2004.

Tramway to Victoria Battery - The Rake

The Martha Mine to Victoria Battery tramway, known locally as "the rake", has considerable cultural heritage significance. It dates from 1896, and was a vital component of the operations of the Waihi Gold Mining Company (and Martha Goldmining Company Ltd. as it became in 1935).

This small gauge railway (2ft 9in.) was constructed to connect the mine with the new Victoria Battery at Waikino, a distance of five and three quarter miles (9km). It crossed the Ohinemuri River just upstream from the Masonry dam on a bridge known as "Black Bridge". The tramway is closely associated with the low level Ohinemuri water race, crossing over it once, and under it twice. Two substantial cuttings were required, one clearly showing the water race crossing the tramway.

The tramway alignment remained virtually unchanged for over 55 years. From No. 1, 2, 4, 6 and 7 shafts on Martha Hill it passed close to the No.5 Shaft and Pumphouse, through the town of Waihi, crossed the Ohinemuri River near the confluence with the Waitete Stream, making its way to the Victoria Battery at Waikino. Branch lines extended to No.3 Shaft on Moresby Avenue, to Union Hill (where the Refinery operated until the close of the mine), the Union Battery on the Ohinemuri River (closed 1911), and a network of interconnecting lines on Martha Hill. The line was lowered over a small section to allow the East Coast Main Trunk Railway to pass over it at the eastern end of the Mangatoetoe Bridge.

A total of six steam locomotives had been in service over the life of the tramway. In order of acquisition they were: Ohinemuri, Victoria, Albert, Waikino, Dominion, and Empire.

Each locomotive hauled a load of 40 side-tipping ore filled trucks on the downhill gradient to Waikino, which amounted to about 60 tons of ore to a rake of trucks. This configuration of locomotive and ore trucks was known as a "rake", and hence the tramway was generally called the "rake line". There was a loop in the tramline at the halfway mark to allow one locomotive hauling a full rake to pass the other locomotive returning to Waihi with an empty rake.

All ore processed by the Victoria Battery came via the tramway. The battery had a nominal capacity of 830 tons per day, or 14 rakes, but this figure was as high as 970 tons in 1911, and down to about 500 tons near the end of the battery life.

As soon as the tramway was completed in 1897, "practically the whole of the stores, machinery, &c., required by the Company at Waihi have been forwarded by this means, thus reducing our expenses for carting. For the future the whole of such goods will be conveyed by this route, which will tend still further to reduce expenses." (Superintendent’s Report, February 11th 1898)

With the arrival of the "Government Railway" (East Coast Main Trunk) in 1905, a siding allowed for easy transfer to the tramway of coal and other goods bound for Martha and the Company’s other mills. The output of the Victoria Battery, the "black slimes", were transported to the refinery on Union Hill via the tramway also.

Operations at Martha mine ceased in 1952, (with clean up at the battery for a year or two after this date) when the tramway was no longer required.

Outside the residential area of Waihi the tramway formation is relatively intact, and readily identifiable for much of its length.

The Masonry dam has been formally recorded as an archaeological site (no. T13/305), and has legal protection under the Historic Places Act (1993). The site (and a section of tramway) also has an "Historic Area" designation pending, under this same Act [completed 2006].

The Victoria Battery site is recorded as archaeological site no. T13/300. 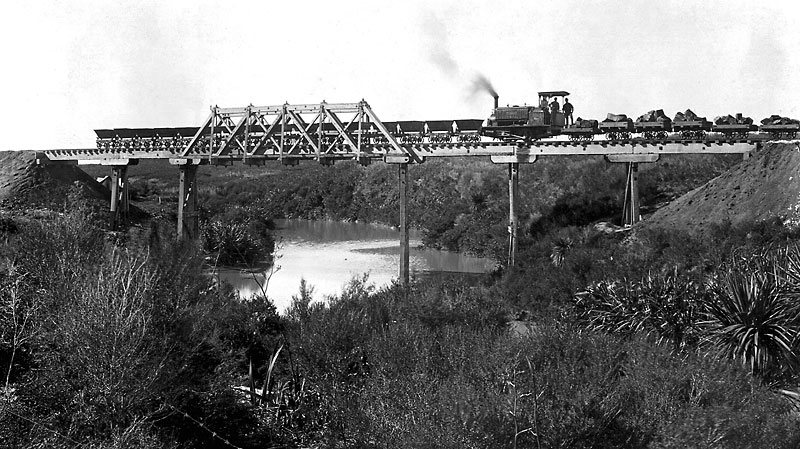